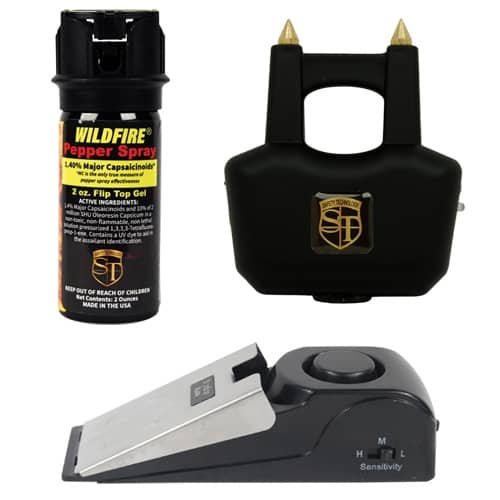 The Xtreme Urban Survival Kit will protect female college students from crimes on and off-campus. It is a collection of useful personal-protection devices, including Wildfire Pepper Gel, a Stun Gun, and a Super Door Stop Alarm to get any female on campus feeling like James Bond.

Crime on and off-campus is not unheard of. One in 5 females is sexually violated on campus. In most cases, sexual crimes are committed by frat bros, who, according to stats, are 300% more likely to rape. But assault and rape aren’t limited on campuses only; instances of violence in popular student hot spots off-campus have also been reported.

Cases like these shine a light on the importance of safety both on and off-campus. Unfortunately, there’s no course on how to stay safe on campus as part of the syllabus. Most colleges don’t have measures to protect female college students from assault and rape. In most cases, reported crimes aren’t even investigated. It’s up to the parents/guardians to protect female college students.

Female safety experts advise that females who are physically and verbally able to resist their assailants are less likely to be sexually assaulted. Plus, the experts insist that this resistance rarely results in any serious bodily harm to the female.

The Super Door stop alarm is a portable, attention-grabbing device for use as a home alarm or personal travel alarm. It can be placed inside an inward-opening door to protect female college students from burglars, stalkers, and related criminals.

This DIY personal safety solution is not a lethal weapon. It emits a 120db siren to sound off intruders and draw attention to a crime. It’s especially a must-have when staying in dodgy dorm rooms or hotels where one has no idea just who has got the keys and might try to intrude.

This door wedge alarm has a motion sensor that sets off the alarm when it’s tampered with; the sensitivity can be set to the user’s preference. It uses a 9-volt battery (not included in the package). It features an ON/OFF switch and battery level indicator lights. Personal alarms are not illegal. They can be used both on and off-campus.

The WildFire Pepper gel discharges the max strength 10 percent formula to disable an assailant. What is even more advantageous is the 8-10 feet travel range and up to 45 minutes of burning sensations.

WildFire Pepper gel is formulated from 2,000,000 SHU’s of fresh pepper to contain the hottest Major Capsaicinoids. It is not flammable at all. All the formula does is it helps to temporarily blind the assailant and cause breathing problems by swelling their veins and mucous membranes. Plus, it carries a UV dye for perpetrator recognition if you care to report the incident to the authorities.

WildFire Pepper gel is convenient to have. It travels farther than pepper sprays, and there’s no chance of it getting blown back into the victim’s face because it’s a thick, sticky gel. It sticks on the assailant’s face like glue, hard to wash off, until they’ve had about 45 minutes of pain. Oh, and it really hurts, alright.

You can get it in 20z or 40z, all packing 1.4% Major Capsaicinoids with 10% max strength. This precious purse pepper gel is perfect for use anywhere, in a car, house, or camping without any over spray to affect those nearby; it only goes the direction you spray.

However, some colleges prohibit pepper gels and sprays on campus. Always check out what policies you are dealing with before including the Pepper gel in the college survival kit.

Stun guns are very handy against street crimes. These bad boys can be used to surprise an attacker or warn them off by discharging loud shots of volts into the air.

They come with a Nylon Belt Holster for an armed look and quick access. They are rechargeable via a USB and features a safety switch in case you forget it on.

This adorable keychain or purse stun gun is in a lipstick-like design and available in black or pink. It’s small in size but packs 3,000,000 volts of stopping power. It got an integrated battery and charger and can be used as a 100 Lumen flashlight.

This stun gun looks exactly like a smart phone but can be used for 12 million volts of the stopping power or an 80 Lumen flash-light. It comes with a belt clip case and charges via a USB. It is useful for surprise attacks; the assailant won’t recognize it until you are pumping immobilizing voltages into their body without any sense of fear in your eyes.

Again, some colleges prohibit the possession of stun guns. However, stun guns are very safe; cases of death due to electrical shock from stun guns are rare. In most of the cases, it is due to an underlying heart condition on the part of the victim. But as always, find out what policies you are dealing with. Xtreme Urban Survival Stun Guns carry a lifetime warranty!

Okay, there you go now; college is one of the most exciting times in the life of the person; help your daughter stay safe so they can treasure this moment. Otherwise, they are going to learn the importance of safety on campus in the hard way.